How do emergency stops and ride evacuations generally work? Why do they sometimes not evacuate a ride after there’s been a problem?
— Wicked Twister Fan

In our last episode, we talked about what happens when somebody hits the Scram Switch; frobs the Big Red Button, or otherwise brings a ride to a screeching halt. Once that has happened, the ride is left in some random condition from which it must recover before it can carry passengers again. Unfortunately, chances are good that there are passengers already on the ride. This means that special precautions must be taken to protect the passengers – either the ride recovery process needs to be conducted in such a way that passenger safety can be assured, or the passengers need to be removed from the ride. Failure to do this can have extremely serious consequences.

Fortunately, this is something that parks plan for. ASTM F2291-14:18.4.1.4 requires the ride designer to disclose to the owner recommended procedures for evacuation and ride restart. ASTM F770-14 in turn requires that the ride owner/operator develop standard operating procedures including plans for rider evacuation. The hazard analysis for the ride would necessitate identifying every location or position in which the ride could stop, and figuring out how to get the riders off of the ride from those positions. For any given ride, there exists some kind of plan for getting people off. Those plans may be subject to change when the conditions aren't quite right, but there is some kind of a plan.

On some rides, the evacuation plan is simple. On the Cedar Downs Racing Derby, for instance, evacuation consists of riders climbing off of their horses and walking quickly but carefully to the nearest exit gate. On a roller coaster, there are defined stopping points which are usually equipped with evacuation platforms. In those cases, operators can approach the stopped train, manually release the restraints, and escort riders off of the ride.

(Note: A question about manually releasing restraints has already been asked and will be the subject of a future episode.)

Things get more complicated when riders end up in unexpected places. When Magnum XL-200 got hung up in the turnaround, the park called in manlifts, bucket trucks, and a ladder truck from a nearby fire department to get access to the train to remove the riders.

In some cases, the ride itself includes an evacuation method. Sky Ride, for example, has a gas engine that can be used to bring all of the cabins into the stations for unloading, should the power fail. Raptor and Millennium Force both have gas-powered funicular lifts that can approach a train on the lift hill to unload riders a row at a time or a car at a time. And yet those systems are seldom used because the lift mechanism also has a backup drive system.

Whatever the evacuation plan or method, the first decision that needs to be made is whether an evacuation is necessary at all. Remember, while it may be inconvenient to have riders dangling in mid-air for an extended period of time, most of the time those riders are not actually in any danger. In fact, the evacuation process may introduce additional hazards which may not be necessary or desirable.

Of course, in some cases the choice is obvious. If the ride has stopped mid-cycle and cannot be operated for some reason – valleyed train on a coaster, certain equipment failure, or weather conditions that preclude operation – the best choice may be to remove the riders from the ride. When the Millennium Force lift system failed with a broken hoist rope, stranding riders on the lift hill, the only choice available was to remove the riders from the train and bring them down on the funicular.

On one of the very few times that I have been evacuated from a coaster at Cedar Point, I was on the last train at the end of the night and high winds precluded operating Magnum XL-200 with an empty train, for fear that an empty train would not have enough energy to overcome the headwinds and would hang up in the turnaround. With one train on the lift hill and another in the station, I had to exit the train from the transfer table just uptrack of the station. I experienced a similar evacuation from the Legend coaster at Holiday World when the train could not safely be brought into the station because of a large bell that was dangling by its pull rope over the track. 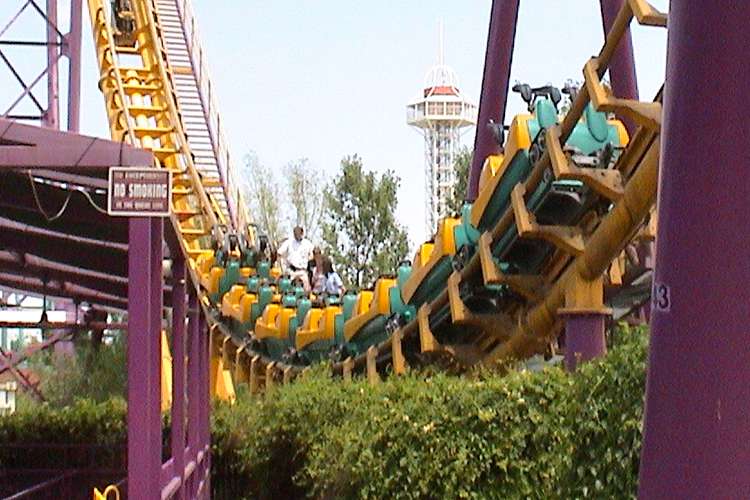 A Vekoma Boomerang is evacuated at Elitch Gardens in 2006 after it valleyed between the loop and the second lift. Photo / Dave Althoff

Even so, the manufacturer has designed an evacuation basket that attaches to the tower, can be raised and lowered with its own hoist mechanism, and can be hand-cranked to rotate into a position to empty four seats at a time. My personal prediction is that because almost anything that could prevent the carriage from being lowered can be repaired or overridden faster than this evacuation system can be deployed, the system will never be used for a real evacuation. But the system does exist, and park staff is trained and has practiced using it. 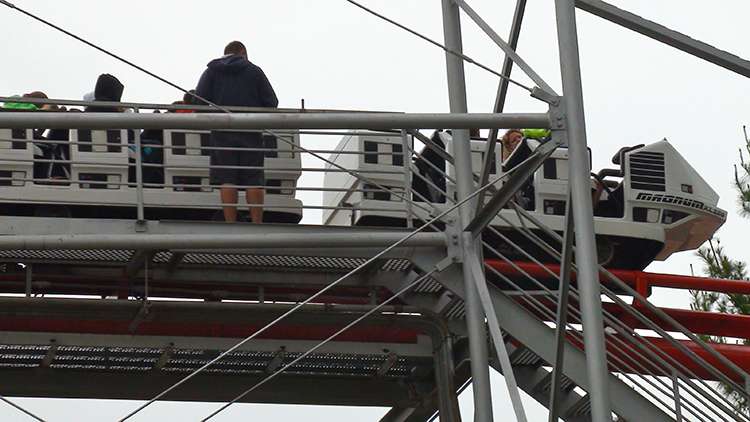 Evacuation of Magnum XL-200 on June 7, 2013. Riders in the lead car had to climb over the seats and exit behind them. Sometimes evacuations don't go according to plan. Photo / Dave Althoff

That is the most basic issue that goes into determining whether an evacuation is appropriate. Consider the following generic logic —

That’s all just to decide what kind of an evacuation plan should be implemented. Once it is decided that the riders have to be removed from the ride, the next step is to collect any personnel or equipment needed to perform the evacuation. That may be as simple as tying off a coaster train with a bit of chain or strap, and dispatching a group of operators to release the riders and walk them down the stairs. Or it could be as complicated as assembling and deploying the Windseeker evacuation boom. In any case, it is the evacuation plan developed by the park in conjunction with information provided by the manufacturer that will ultimately get the riders back on the ground safely.

Cedar Point is a major amusement park, which not only has well developed evacuation plans for all of its rides, but in fact has well developed emergency plans for all kinds of incidents. Part of the plan involves ongoing communication with the local emergency authorities, including the regional emergency management authorities, police, fire, and rescue departments, and other local officials. This is important because, as a general rule, in an emergency situation, emergency response authorities can, and often will, take over the scene and decide what happens next. These first-responders are trained in rescuing people, but they are not necessarily familiar with the amusement ride machinery. There have been situations in other parks and at carnivals where a ride experiences some failure, and for whatever reason the fire brigade shows up and prevents the park’s own team from implementing its own evacuation plan.

At best, the emergency responders will evaluate and then implement the park’s plan. At worst, they will rush in with their ladders and equipment and attempt to get the passengers off of the ride in whatever way they can. By now, most operators have proactively partnered with emergency responders in order to avoid problems, and in particular, I'm not aware of this ever happening at Cedar Point. But it is worth noting because this is yet another situation where riders may be “trapped” on a ride for longer than seems necessary when something goes wrong.