What is the mechanism that causes the restraints on roller coaster trains to lock in place then release once the ride is over? Is this mechanism changed on newer coasters from what it has been on older ones? And when riders have to be evacuated away from the station — either from a lift hill or a brake run — how do operators disengage the restraints?
— Perpetual Obsession

The primary requirement for the restraint system on a roller coaster is that it be secure and effective. There are a couple of requirements spelled out in the ASTM standards, particularly F2291-14 section 6, which lays out certain specifications. Mostly, the standards require that the ride have restraints appropriate to the ride actions and to the expected passengers. There is also a requirement for a manual restraint release. Not that any reasonable designer would honestly consider building a ride without one.

Perhaps the most important requirement is that the system be reliable. For that reason, most rides make use of redundant, failsafe mechanisms that will reliably lock the restraints in position. For that reason, the mechanisms have not changed a lot over the years. Most rides use relatively simple mechanical means for locking lap bars and shoulder bars in place. Some rides use a combination of mechanical and hydraulic systems, and the most recent systems generally use hydraulic locking systems.

In recent years, we’ve seen a shift to passive hydraulic restraints, which have certain benefits over older mechanical systems. First, the hydraulic systems are infinitely adjustable, and can be plumbed to offer a ratcheting action. Second, certain European manufacturers are now offering the locking mechanism — a hydraulic cylinder, an attached bladder accumulator to both handle the excess fluid as the rod retracts and serve as a return spring, and a solenoid valve — as a pre-manufactured self-contained component that can be bolted into nearly any ride.

By mounting the assembly in different ways, the same locking cylinder can be used for a shoulder bar or a lap bar. Accordingly, we see more or less the same locking cylinders used on Shoot the Rapids, Maverick, Top Thrill Dragster, Wicked Twister and Millennium Force. Generally, two cylinder assemblies are used, each one serving as a redundant backup for the other (here’s an example). That’s not the actual mechanism used on the Intamin coasters, but it is a similar unit. The Intamin units are built by Oelhydraulik Hagenbuch AG of Switzerland.

A plunger under the front of each train opens the lap bars. 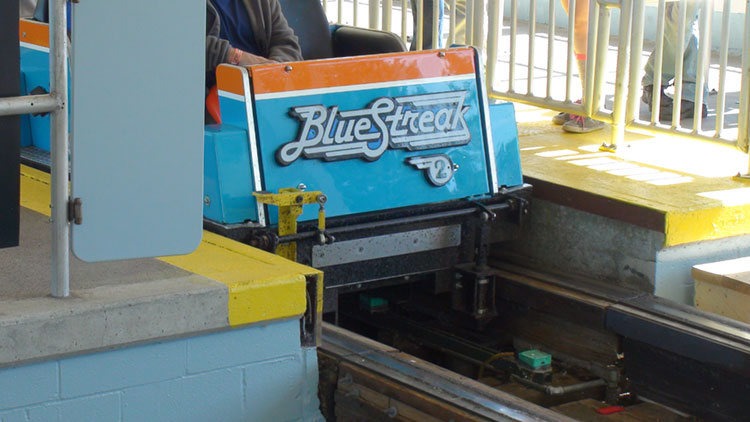 The linkage on the front of the Blue Streak train operates all of the lap bars in the car. The plunger on the far side is the automated release, while the yellow assembly on the near side serves as a foot pedal. Photo / Dave Althoff 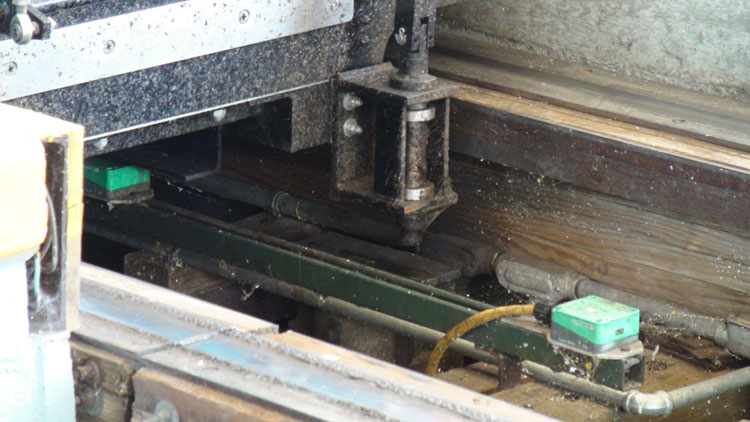 Release plunger in the locked position. You can see the flat metal plate below the plunger which rises up to release the lap bars. Photo / Dave Althoff

Bars under (or over for the case of Raptor) the cars are moved up and down to open and lock the restraints. 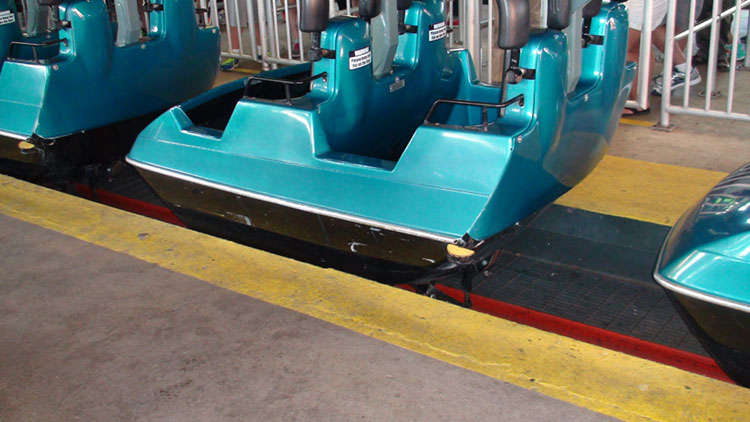 Iron Dragon has a manual release pedal similar to Corkscrew, but this one is spring loaded and stays locked unless an operator is standing on the pedal, or the automatic release roller is pushed upward by the rails in the station. Photo / Dave Althoff 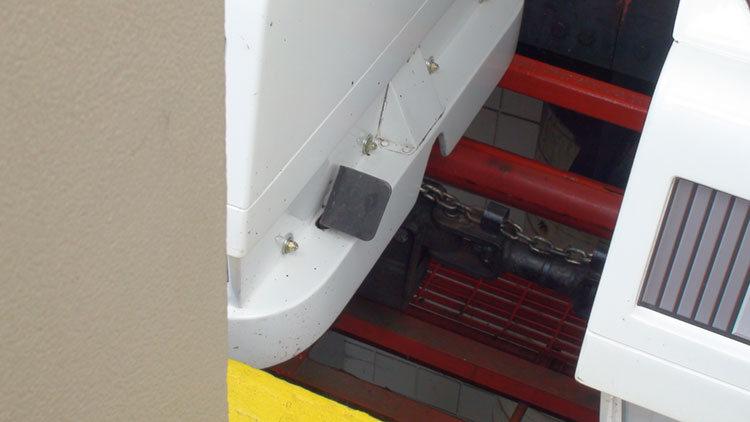 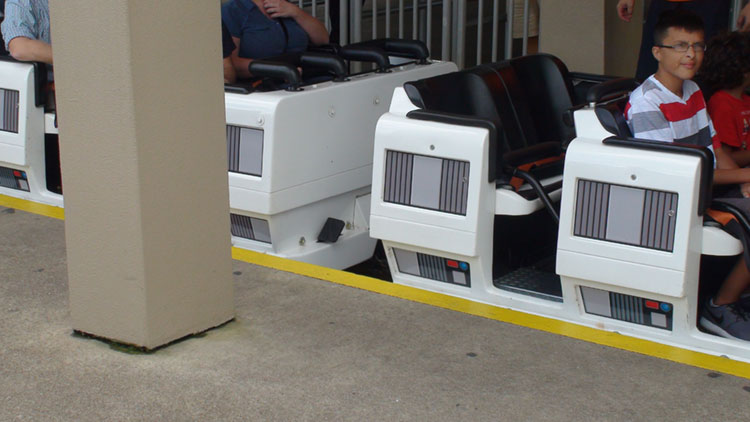 Magnum XL-200 uses lap bar manual release pedals on the front of each car except for the lead car, which has its release pedal on the back. This is the same configuration used on Gemini. Photos / Dave Althoff 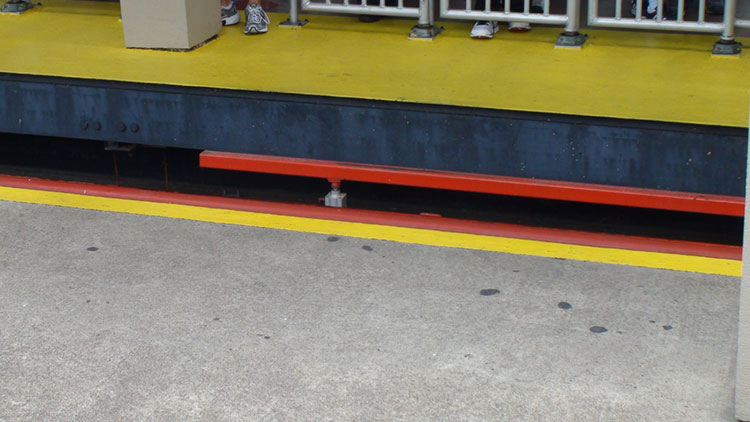 This rail alongside the track is used to automatically release the lap bars. Photo / Dave Althoff 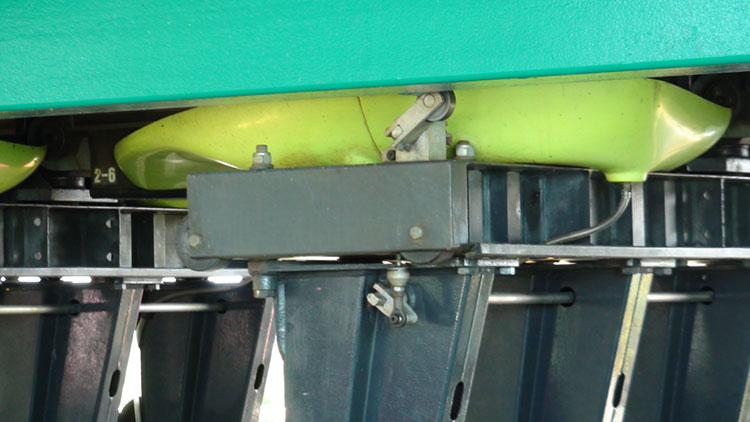 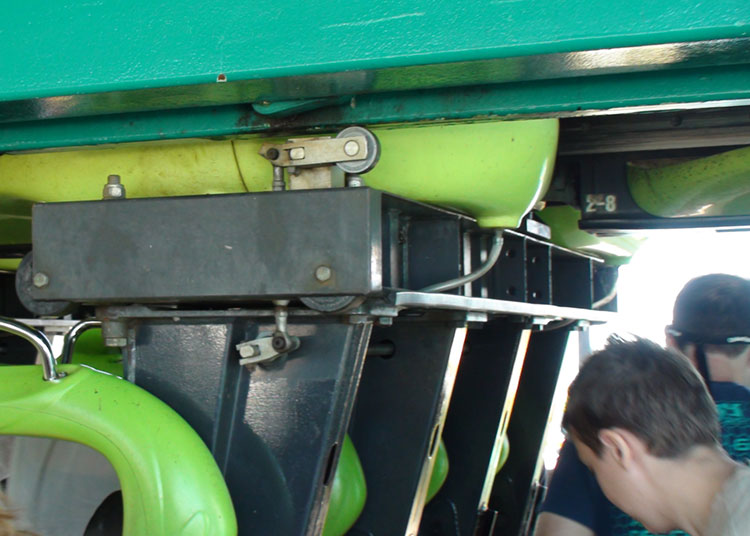 This roller on each car is pushed down by a rail in the station to unlock the lap bars. The official manual release requires attaching a small handle or wrench to the end of the rod that runs between the four seats. The second photo shows the unlocked position. Photos / Dave Althoff 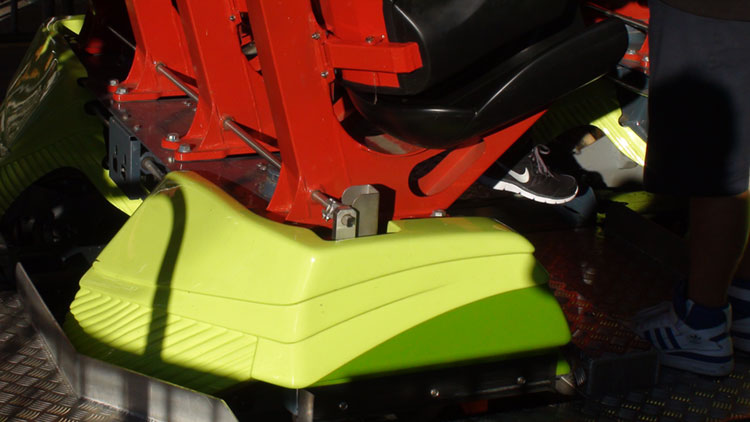 The mechanism on Rougarou is similar to the one on Raptor, but the linkage is below the seats instead of above. Photo / Dave Althoff

Electrical contacts are pushed into contact with the train to operate the restraints, and in some cases (Maverick) to feed back the restraint status to the ride controls. 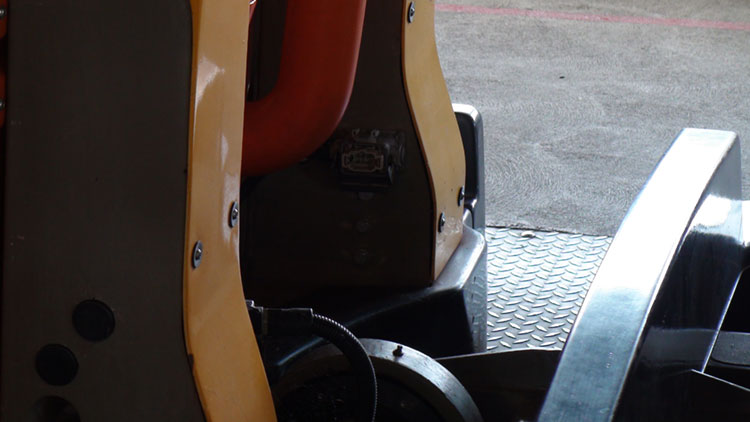 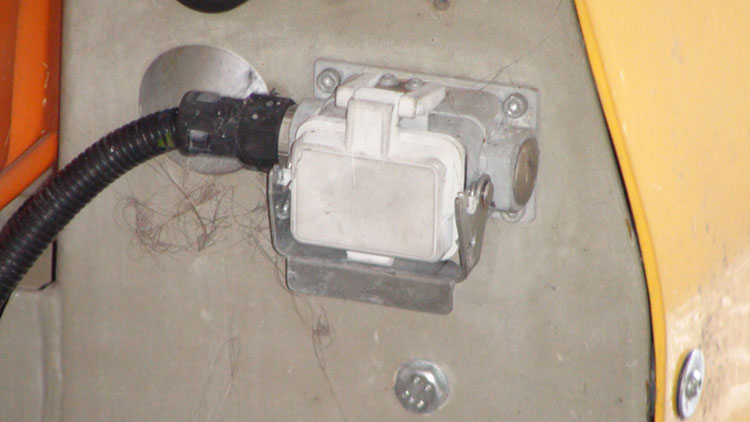 To manually release the lap bars on Maverick, a battery box is connected to this socket on the train. Photo / Dave Althoff 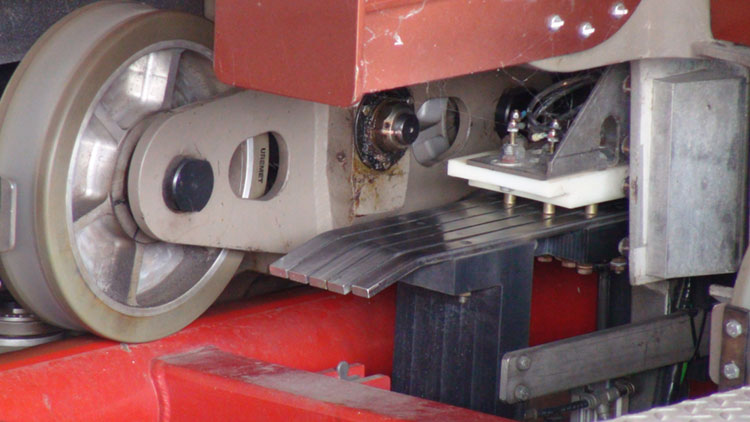 In the station, these electrical contacts provide power to release the lap bars, and allow for the signal loop that tells the ride computer whether all of the lap bars are ‘down’ or not. Photo / Dave Althoff 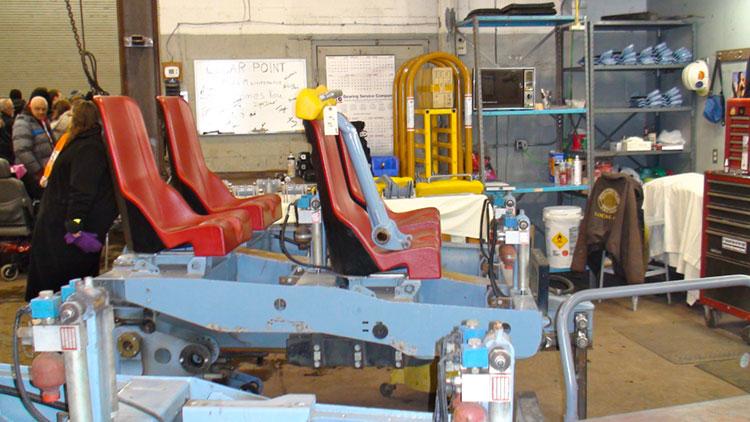 With the covers off and the train mostly taken apart you can see the hydraulic cylinders that lock the lap bars on Top Thrill Dragster. The mechanisms on Millennium Force and Wicked Twister are similar. Photo / Dave Althoff

Spring-loaded contacts on the track connect with pins on the train to operate restraint valves and feed restraint status back to the ride controls. 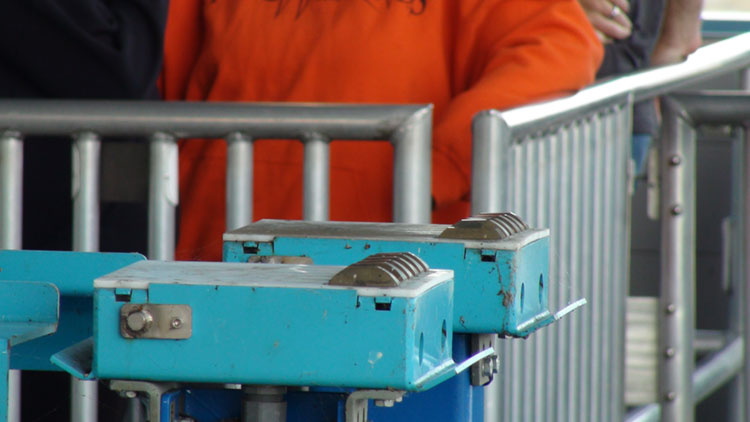 Of course all of these rides have some form of manual release system. On most rides, it’s a foot pedal mounted on the front or back of each car. On Mine Ride and Corkscrew, there is no automated system for opening and closing the lap bars, so the manual release pedals are used in the station. All of the Arrow coasters — Mine Ride, Corkscrew, Gemini, Iron Dragon, and Magnum XL-200 — have foot pedals that release all of the restraints in each car. The earlier B&M rides, Raptor and Rougarou, have a mechanical linkage that can be tripped manually either by pushing on the station release lever, or by slipping a small handle onto the end of the link rod. The new hydraulic systems are set up with a solenoid valve so electrical power is needed to open the restraint. This is usually provided (outside the station) by a battery box that attaches to a connector on the car. For Mean Streak and Blue Streak, a small hook can be used to manually lift the locking pawls on the lap bar lock, but both rides have also been equipped with foot pedals on the front of each car to release the lap bars. 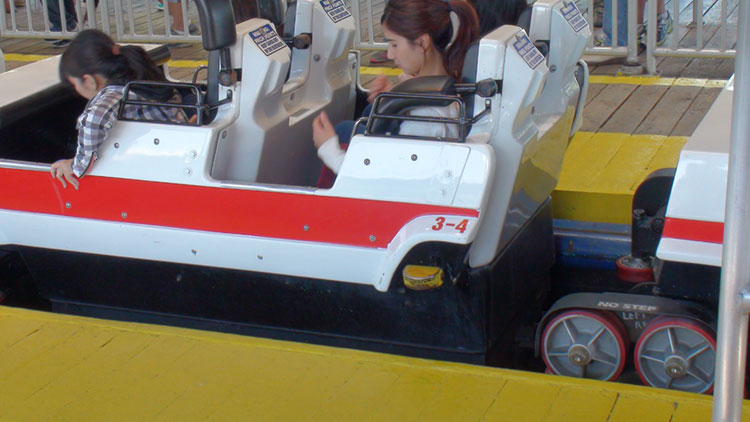 Each Corkscrew car has a release pedal which is manually operated and will latch in the open or locked position. The shoulder bars in this car are locked. Photo / Dave Althoff 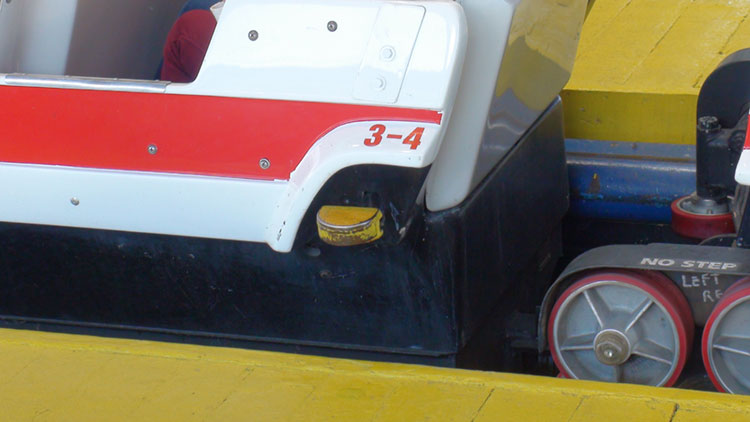 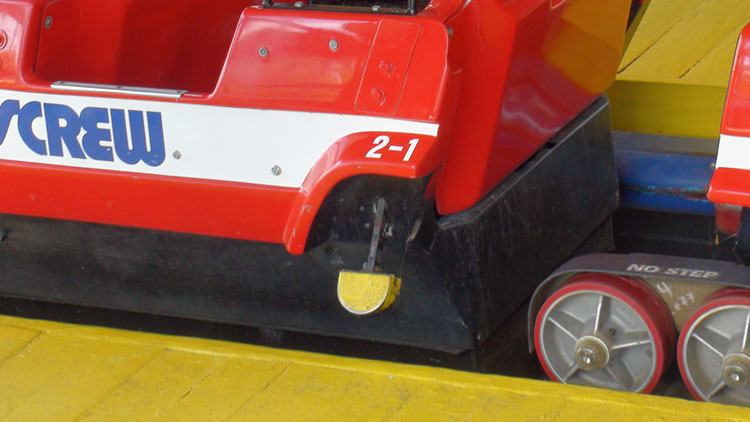 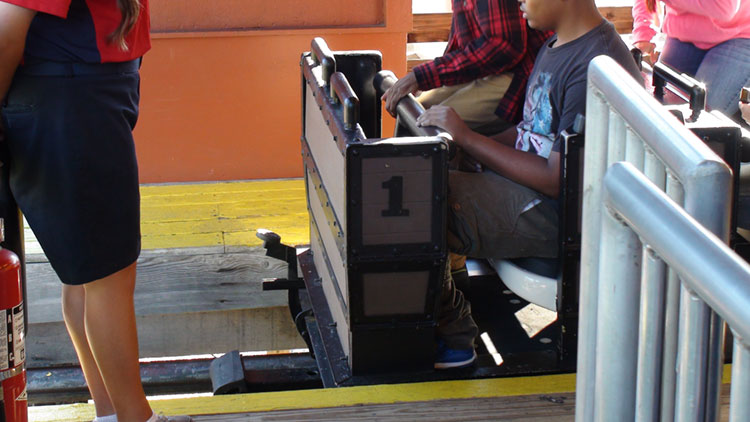 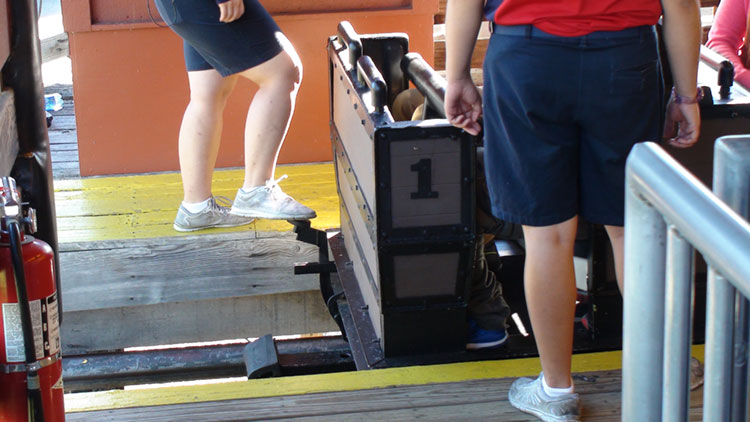 Pressing the pedal allows the lap bars to be moved between OPEN and CLOSED positions. Photo / Dave Althoff 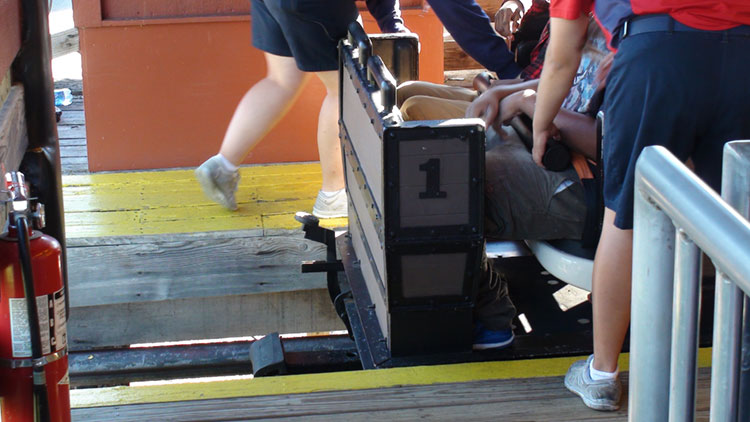 Once the lap bar is fully opened or closed the foot pedal returns to its locked position. Photo / Dave Althoff

Perhaps the biggest change to happen in recent years is the addition of status reporting to the lap bar assemblies. Since the mid-2000’s, there has been a kind of a nebulous requirement which is now in ASTM F2291-14:6.4.3.8(5) to provide

“an external correct or incorrect indication”

with a further requirement that

“Detecting the failure of any monitored device shall either bring the ride to a cycle stop or inhibit cycle start.”

What that means is that there needs to be a means for checking that the safety restraint is locked, and I believe manual checks and external safety belts attached to the restraint (as on the B&M coasters) satisfy this requirement, as do lap bars that open automatically when unlocked (as on the Intamin coasters). Corkscrew is a special case because its manually operated restraints could potentially be left in the unlocked position at the start of the ride, so from the very beginning, Arrow included a system that would count the release pedals as the train exits the station and shut down the lift hill if one or more of the pedals are in the wrong position.

Except for Corkscrew and Mine Ride, all of the coasters now have mechanical restraint systems that automatically switch to the ‘locked’ position when the external release system is disconnected, so there is no real need to check for the locked position as the train leaves the station. But ride designers are now being more cautious than ever. While is is not explicitly required by the standard, more and more rides are including a restraint position detection system, and using a circuit loop to send that information back to the ride control system. That can be as simple as putting a switch on each restraint and tying them all together in a series loop so that the ride control system gets a simple READY indication from the train, or as complex as providing a separate signal for every seat on the train. Or anything in between.

On maXair and Windseeker, the restraint loop covers a group of seats for each indicator. The trade-off, of course, is that with the simpler system, only one input on the control system is needed, but operationally it’s a game of hide-and-seek to find the offending restraint. The more complicated system requires some means of getting a signal back to the control system for every seat, but the operators can tell immediately which seat isn’t properly locked. Both of these configurations are in use at Cedar Point: Maverick has lap bar position detection for the entire train, while GateKeeper has indications for each seat.

This video shows a variation on the “Arrow Dance” in which an operator kicks the pedals on the Double Loop at Geauga Lake to release the shoulder bars as the train enters the station. To the best of my knowledge this was never done at Cedar Point.

Have a question you’d like to see answered? Email Dave at rideman@davealthoff.com.