Magnetic braking systems are found on rides such as Top Thrill Dragster, Maverick, and Banshee. Do these rides employ electromagnets or permanent magnets? How are trains on these rides stopped in the event of a power outage? — Matthew

By now, magnetic braking systems have been around a long time. The earliest one I am aware of on a major amusement ride was on Kentucky Kingdom's Hellevator in 1996, the first of the Intamin second-generation free-fall towers. The technology moved to roller coasters in 1999, with Superman: Ride of Steel at Darien Lake and the Funtastic Shows Wildcat at the Western Washington Fairgrounds, and of course the following year, it was employed on Cedar Point's Millennium Force. Since then, magnetic brakes have been used at Cedar Point on Wicked Twister, Top Thrill Dragster, Maverick, GateKeeper, Snake River Falls, and even on Rougarou. All of these systems employ rare-earth permanent magnets and braking fins which are electrically conductive, but non-ferrous and therefore not attracted to magnets. These fins are usually made of alloys made mostly of aluminum or copper.

A magnetic brake caliper disengaged from one of the fins on Millennium Force. 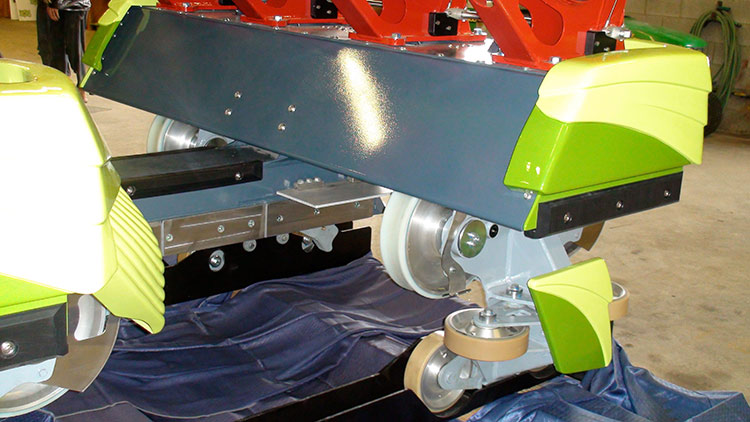 One of the changes in the conversion to Rougarou was the addition of magnetic brake fins to the train for the initial approach to the first safety brake.

The principle is simple enough: if you pass a conductor through a magnetic field, an electric current is generated in the conductor. That current creates its own magnetic field which interacts with the original field, and ultimately has the effect of resisting the motion of the conductor through the field. In other words, you get a braking action. It's especially attractive for use on roller coasters and other amusement rides because the amount of braking force is proportional to the difference in velocity between the magnetic field and the conductor. So rapid motion creates a high braking force, which diminishes to zero when the motion stops. This means that while the magnetic brakes can bring a vehicle to a near-stop, they cannot be used to hold the vehicle in place. Most rides that use magnetic brakes also use advancing drive systems, and these can be used to stop the vehicles.

In practice, it doesn't really matter whether the magnets or the braking fin are on the vehicle. On Millennium Force and Rougarou (and Kings Island's Banshee, since you mentioned it), which have relatively few braking magnets, it makes sense to put the magnets on the track and just put an aluminum or copper fin on the train. Top Thrill Dragster, on the other hand, has so many braking points because of the launch track, plus the brakes need to be moved very rapidly for the safety system to work properly, so it makes more sense to put the magnets on the train, and put the braking fins on the track. All of these systems make use of rare-earth permanent magnets.

Where things get really interesting is on Wicked Twister and Maverick. These rides use linear motors to propel the train. In the case of Wicked Twister, the train is propelled by a series of linear induction motors (LIMs). In this case the principle is exactly the same as for the magnetic brakes, except that instead of permanent magnets, the ride uses a series of three-phase electromagnetic coils. By generating a moving magnetic field, the coils induce movement in the reaction plates on the train, causing the train to move. In the case of Wicked Twister, the LIMs are used only to move the train forward or backward. A set of magnetic brake calipers (permanent magnets mounted on a sliding carriage) drops down over the outer fins on the train to provide braking exactly as on Millennium Force during the last backward pass through the motors. Then the LIMs are used to precisely drive the train into the station and park it for unloading. 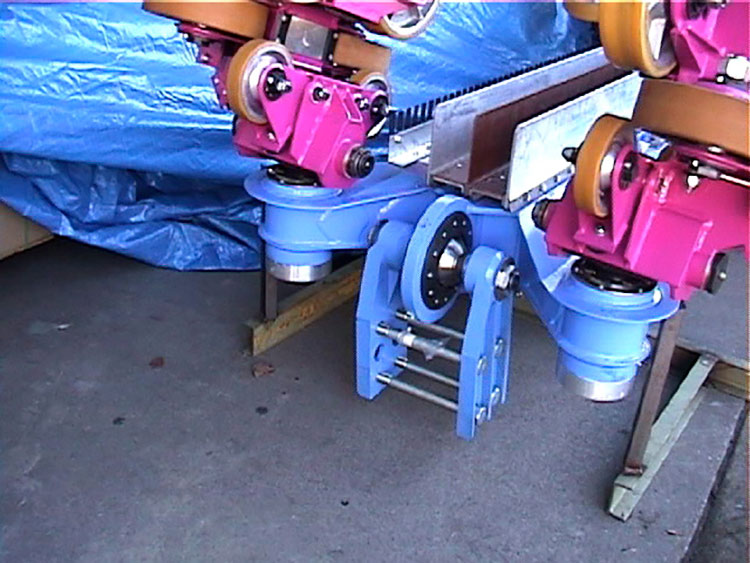 Each car on Wicked Twister has three fins. The center copper fin is used only for propulsion; the outer aluminum fins are used for both propulsion and for braking.

Maverick introduces another technology. Like Wicked Twister, Maverick is propelled by linear electric motors. Unlike Wicked Twister, Maverick uses linear synchronous motors (LSMs). The difference between the LIM and the LSM is that while the LIM induces a magnetic field in the reaction plate and pushes that field, the LSM interacts with the field of a permanent magnet in place of the reaction plate. So the Maverick trains have magnets bolted to the bottom on either side of a channel. With careful timing, the electromagnet coils on the track interact with the magnets on the Maverick train to push the train up the lift hill, and to launch it to high speed in the launch tunnel. Conveniently, the very same magnets on the train can be used in conjunction with copper and aluminum braking fins, just as on Top Thrill Dragster, to slow the train when needed. 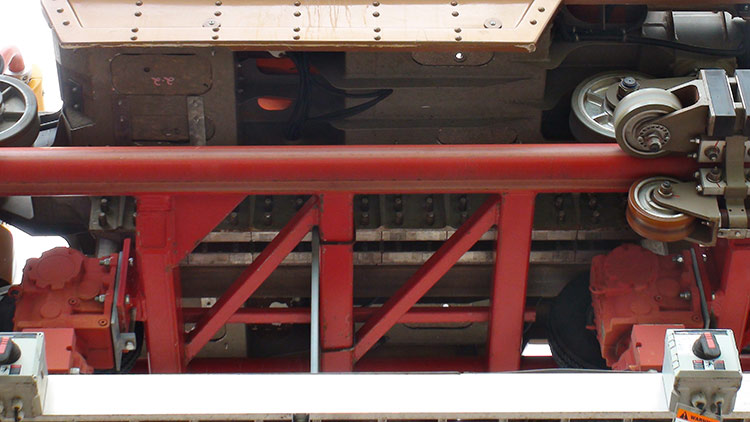 Here you can see the magnet assemblies bolted to the bottom of the Maverick car. The flat plate on the far side is the friction surface for the advancing tires.

Maverick uses a combination of fixed and retractable brake fins to control the movement of trains.

Maverick has an added bonus. The electromagnet coils are really nothing more than a three-phase coil of wire connected to an AC power supply. When the power is shut off, that's just a short-circuit coil, electrically very similar to a plain metal reaction plate. In other words, when the power is lost, all of those LSM coil packs (motors) on the lift hill and in the launch tunnel effectively become brake fins. This is why Maverick requires no anti-rollback devices on the lift hill. If power is lost, the train's speed will be limited as it rolls back down the hill to the staging point at the base of the lift. There, the advancing drive will drag the train to a full stop.

Likewise, the launch in the tunnel is uphill, so if the power fails, gravity will drag the train back to the base of the launch, its speed limited by the braking action of the motor coils. That won't necessarily bring the train to a stop, but it will come close.

On Maverick, each block brake location uses, instead of a brake, a set of drive wheels. A pneumatic rubber tire is attached to a reducing gear assembly and connected to a variable-frequency (for our purposes meaning its speed can be precisely controlled) electric motor. Of course, the electric motor won't operate if power is lost, but the way the reducing gears are built, it won't turn either. Any trains that are out rolling around when the power fails will be slowed as usual by the magnetic brake assemblies, then will come to a stop on the first of the feed tires.

The advancing wheels on Maverick use gearboxes that allow for positive control over the wheels: the wheels will not turn unless the motor is turning.

There is no danger of a collision in this case because standard blocking rules dictate that a train may not be allowed into a block until the stopping position at the end of the block is clear. On Maverick, the blocking rules are modified a little because a launched train may have to stop at either end of a block. For this reason, the second train on Maverick may not move up to the advancing tires at the base of the lift until the first train has cleared the top of the lift. 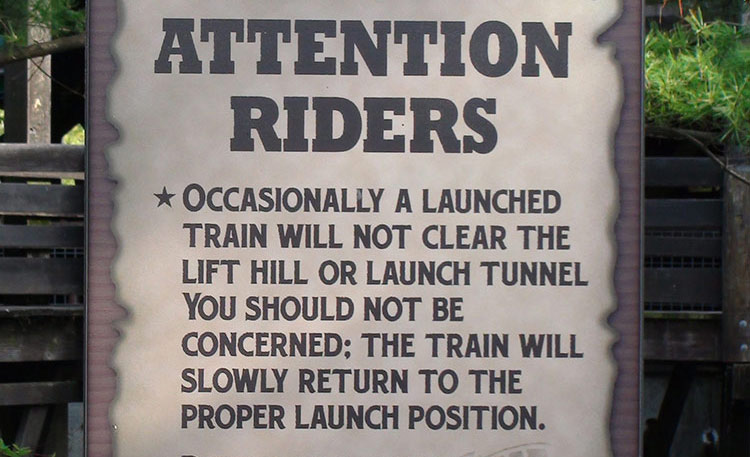 On Maverick the LSM coil packs are used as brake fins if the power fails or the launch has to be aborted.